I’ve always wanted a Saber Tooth Lion skull. I don’t know why, maybe I’m a little weird, but the first time I saw one in a museum (I think in the Natural History museum in DC) I’ve wanted one. Real skulls are rare and extremely expensive, but there are companies that make high quality casts from the originals. Trouble is these aren’t cheap either. One of these skulls has been on my list of carving projects.

Now I don’t have to go to the trouble. During a recent trip to Mexico I happened across a very high quality reproduction at a Mayan ruin. Among the cheap crap being sold by the countless pests that follow you where ever you go in Mexico, with the annoying, “Senior, you buy. Cheaper than Walmart. Almost free. How much you pay?” was this beautiful reminder of the times when humans were not at the top of the food chain. After some haggling, I managed to talk the young Mayan entrepreneur into accepting $50–a great buy. Here is what it looked like when I bought it. 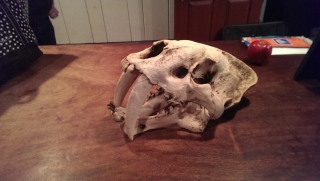 The skull I first saw in the museum was found at the La Brea tar pits in California. Spending thousands of years immersed in asphalt created a beautiful patina and rich color. I used a combination of dyes and linseed oil to create a look that is very close to the real thing. I had a scrap piece of birdseye maple laying around that was just the right size for a base. I used a water based finish so the color wouldn’t change. I like the contrast. 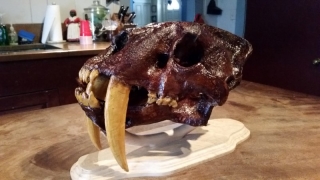 Now I have a good model should I ever want to carve one.