I’ve been doing more shows and have finally bought one of those EZ-Up tents or shelters–whatever they call them. These things are great. Two people can have one set up in about one minute with a little practice. It folds up nice and neat into a bag with wheels, so you can easily transport it. The problem with these things is that they can be deadly weapons in the wind. Unless they are staked or weighed down, a little wind can send them airborne like a kite. EZ-Up sells bags that you fill with sand and wrap around the legs. They average around $68 dollars, though you can get them online for about $50. Stakes usually aren’t acceptable for various reasons, so most people rely on some sort of weights. People have come up with all sorts of gadgets as weights to hold down their tent. I’ve come up with a great and inexpensive solution to the problem. Read on to see what I came up with.

People have used everything from gallon water jugs hung from the canopy structure, to barbells, to good old fashioned sand bags, to 4″ PVC pipes filled with sand or water. There are some great commercial weights available aside from the sand bags sold by EZ-UP mentioned earlier, but they are very expensive.

Water jugs aren’t heavy enough. A gallon of water only weighs 8 pounds. And hanging them from the canopy supports creates obstacles for people to hit their heads on. To come up with the recommended weight of 40 lbs per leg, or a total of 160 lbs, you would need 20 one gallon water jugs hanging from your tent. That would be pretty ugly. Cinder blocks, barbell weights and other such creations will cause a tripping hazard.

What most people who don’t buy one of the several expensive solutions usually end up using is PVC pipe filled with sand and strap them to the legs. But to create a 40 lb weight out of a sand filled PVC pipe requires a big, ugly 4″ pipe. Believe it or not sand is not really a heavy material, relatively speaking. It only weighs 100 lbs per cubic foot. A cubic foot may not sound like much, but consider this, you would need a piece of 4″ ID PVC pipe 56″ long filled with dry sand to get something that weighed 40 lbs. For those of you who can’t picture how big that would be, take a trip to Home Depot and ask to see some 4″ PVC. Tie a 4″ piece of PVC pipe 56″ long to each one of your tent legs and you’ll have one ugly display.

To take care of the ugly factor you need a much thinner pipe. Two inch PVC doesn’t look bad, but using sand, you would need 225 inches of 2″ PVC pipe to come up with a 40 lb weight. I decided to use lead instead of sand. Lead weighs about 7 times as much as dry sand. But lead is expensive compared to sand.

If you are willing to make a little effort you can probably find plenty of lead for free. Auto repair shops, tire shops and junk yards usually have plenty of lead laying around in the form of old used wheel weights. I was able to get about 200 lbs of old wheel weights from a junk yard for free. That equals one and a half 5 gallon buckets full. If you are a little resourceful this should be easy for the average do-it-yourselfer to handle.

I figured I would just fill the length of PVC pipe with the old wheel weights and I’d be good to go. With a little simple math I figured I needed 46″ lengths of pipe to filled with wheel weights to equal 50 lbs, more than enough weight. But that didn’t work. Due to the shape of the weights and all the lighter steel (the clips embedded in the lead that hold the weight to the wheel) I only ended up with twenty pounds in the tube. It was clear that the lead needed to be more concentrated. I had plenty of lead, all I had to do was melt it and make some round disk like ingots and fill the tubes.

So, optimistically I grabbed my propane torch and an old iron ladle I had and filled it with weights and started melting. It worked, but it took way too long. Here’s a photo of the ladle and the torch I used. 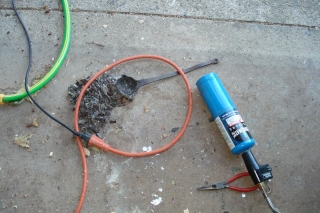 The shape of the ladle was just right. About half filled with lead the ladle made a mold just the right size to fit in the 2″ PVC pipe. But at the rate I was able to create the ingots it would take a week.

I own an old house with 8 fireplaces and we have lots of old cast iron baking pans, muffin pans and the like. I dug up an old muffin pan with eleven spaces. Then I grabbed an old Maxwell House coffee can, 6 cinder blocks, a fan and some wood and made a mini blast furnace. Since pictures will do a better job of explaining the setup take a look at the following photos. 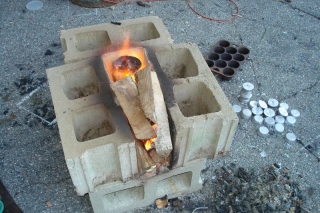 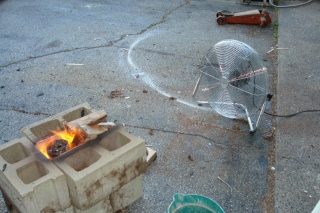 As you can see by the photos, the fire was hot enough to turn the coffee can cherry red. I just had to keep feeding the can with wheel weights until it was about 3/4 full of molten lead. Once the fire was good and hot it only took a few minutes to melt enough lead to fill the muffin pan twice. That was about all the lead the coffee can would hold. Then I’d have to dump out all the steel clips and start over again. Altogether it took about 4 hours to make enough ingots to fill four 46″ lengths of PVC pipe. I just glued caps to the ends with the special PVC glue. Here’s what the ingots look like. And to the left is the large pile of steel clips that were left over after the lead melted away.

And here is what the pipe looks like. Much nicer looking than a 4″ pipe. I’ll just use zip ties to hold the pipes to the tent legs. They will almost blend right in. 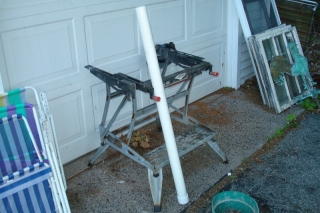 If you decide to try this yourself, please follow some basic safety advice. The most important safety gear you need is a full face shield. Molten lead is dangerous to work with. I’ve cast lead bullets in the past, so I had some experience already. The slightest bit of moisture could cause the lead to explode all over you. I know an old guy who had this happen to him while casting bullets. Luckily he was wearing a face shield and only burned his arms and forehead.

Be careful pouring the lead. Make sure you have a good solid hold onto the coffee can or whatever makeshift crucible you are using.

Use cinder blocks that you don’t need when you are done. The heat will crack them.

Make sure there is nothing behind your little furnace that will catch fire, like dry leaves, a car or a house. The fan will blow hot embers all over the place. Don’t start an unwanted fire.

Finally, wait until the ingots have cooled enough to handle them before you start dropping them into the pipe. You’ll burn yourself and melt the plastic pipe if they’re too hot.

The total cost for the weights was about $20 for the pipe and end caps. I already had the cinder blocks but I believe they cost less than 2 dollars each, so that’s only another ten or twelve dollars.

We use Seal Line Bags, size Large, and we can get 8 gallons per bag which is 64lbs. per bag. We have 4 of them and hang one from each corner with a tie-down strap so the bag sits on the ground. They are easy to store and don’t add weight during transport, just fill them with a hose when you get to where you are going.